Atari on the Carpet

If, like me, you had some pretty awesome parents, then when you were a kid things just kind of appeared in your life. One day when my friends and I were playing in the backyard, I found out that my dad had a freaking awesome Darth Vader mask because he showed up wearing some bright shorts and the Darth Vader mask, and he scared the crap out of us. And so it was the same with two Atari systems, the 800XL and the ST.

After I got a hand-me-down Sony Trinitron CRT color TV that had clicky channel buttons down the side - thirteen of them? - the Atari 800XL mysteriously appeared in my room. This was probably around the time that my dad got his ST, and so the 800XL was perhaps a hand-me-down like that wood-and-chrome Sony. It's funny because the 800XL was a computer, with lots of external peripherals for data storage, etc., but it also had a slot for cartridges, and ports for any sort of compatible game pad/joystick. So I had it on the floor and played sitting on the carpet, staring up at the TV on a stand, when most people probably had it as a desktop computer. 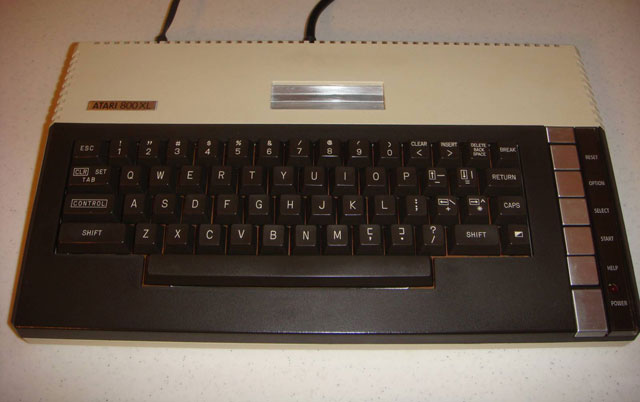 The Atari 800XL in its armored case, ready to withstand an apocalypse. Did all that metal serve as a heat sink?

The first two games that spring to mind are Star Raiders and Defender. Star Raiders stands out because it was a massive space simulation that you got to control with a joystick. I remember Defender because it had harsh (what I now know to be) digital noise sound effects that scared me. We also had paddle controllers for the 800XL. I think my mom and I used them when we played Breakout together.